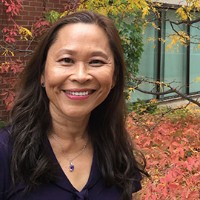 Eleanor Ty is Professor of English at Laurier and writes on novels, memoirs, films, and graphic narratives by contemporary writers. She has published eleven books: on Canadian literature, cultural memory, Asian American and Asian Canadian writing, and 18th century British women novelists. Her chapters and articles engaged with questions of gender, identity, trauma, abjection, digital media, youth, diaspora, and life writing. She is fond of BBC and other TV series dramas and Jane Austen.

Her book, Asianfail: Narratives of Disenchantment and the Model Minority (2017) looks at how a new generation of Asian Americans and Asian Canadians struggle with the expectations, work ethic and self-sacrifice of their parents. Rejecting an ethos obsessed with professional status and accruing money, the protagonists of recent narratives are disenchanted with their lives and seek fulfillment by prioritizing relationships, personal growth, and cultural success, questioning outmoded notions of the "model minority." It was awarded best adult non-fiction book for 2017 by APALA: Asian Pacific American Librarians Association.

Professor Ty was awarded a Fulbright Canada Visiting Research Chair for 2018-2019 at the Department of Asian American Studies, University of California Santa Barbara. She conducted research on contemporary Asian North American Literature and taught a course on Asian American Graphic novels in winter 2019.

Ty was awarded Laurier's University Research Professor in 2015. The recipient of four Social Sciences and Humanities Research Council research grants and two SSHRC conference grants, she has been a visiting professor at Universität Trier, Philipps-Universität Marburg and the University of Saarland, Saarbrücken in Germany.

In 2017 she served as Program Co-Chair for the Association for Asian American Studies (Portland 2017); has served as Academic Co-Convenor of Congress 2012; Chair of the Department of English and Film Studies from 2004-2009; Graduate Officer for the Department of English, 2000-2003; Women’s Studies Program Coordinator, 2000-2003; and President of the Canadian Association of Chairs of English from 2008-2009.

My recent research has focused on Asian Americans and Asian Canadians and the ways their narratives (novels, films, graphic narratives, memoirs) represent their diasporic identities. Some of the topics I have worked on include memory, invisibility, globalization, second-generation immigrants and failure. Before 2000, I worked on late 19th-century British women writers such as Mary Wollstonecraft, Mary Hays, Amelia Opie, Elizabeth Inchbald and others. I looked at how these female authors used the sentimental novel to recast stereotypes of the feminine – the seduced woman, the passive wife, or the obedient daughter — and how their novels empower women. I have published 11 books to date (5 monographs and 6 edited volumes).

She Stoops To Conquer takes on 18th century 'feminism'