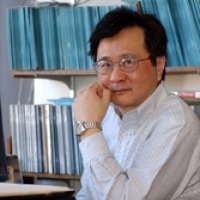 My current interests are in the various topological phases of matter. From its initial focus on electronic states on the surfaces of 3D topological insulators (the “Z2 invariant” materials, e.g. Bi2Se3 and Bi2Te2Se), topological concepts have spread rapidly to enrich our understanding of quantum ...

My current interests are in the various topological phases of matter. From its initial focus on electronic states on the surfaces of 3D topological insulators (the “Z2 invariant” materials, e.g. Bi2Se3 and Bi2Te2Se), topological concepts have spread rapidly to enrich our understanding of quantum states in other classes of materials notably 3D semimetals. A common theme is the appearance of the Berry curvature and its associated Chern flux in semimetals and semiconductors in which either time reversal symmetry or inversion symmetry is (or both are) broken. I am interested in how the Berry curvature affects ordinary transport properties such as the Hall effect, magnetoresistance, thermopower and thermal Hall effect. (The Berry curvature is fruitfully regarded as an effective magnetic field that lives in k space. The associated flux of this magnetic field is called the Chern flux.) Brief, hopefully accessible, introductions to the technical terms are provided on my website.

Dirac/Weyl semimetals In the past 3 years, we have researched the 3D Dirac semimetals Na3Bi and Cd3As2. These materials have Dirac cones with nodes that are protected against hybridization by crystalline symmetry. In an applied magnetic field, each Dirac node becomes a superposition of Weyl nodes. (Weyl states are closely similar to massless Dirac states except they have an intrinsic handedness called chirality. In k space Weyl nodes act as monopole sources and sinks of Berry curvature). A number of unusual transport features have been uncovered, the most striking of which is the chiral anomaly. My group is engaged in mapping out how the appearance of the chiral anomaly affects all the transport properties. (The massless Dirac equation describes two chiral populations that do not mix. Application of parallel electric and magnetic fields forces the two populations to mix, producing an axial current. The appearance of this current is called the chiral anomaly.) Our search for Weyl physics has expanded to many other classes of semimetals. For instance, we recently found that the half Heusler GdPtBi also displays the chiral anomaly (a magnetic field is required to produce the Weyl states).

High pressure experiments A large group of materials that are potentially important for these investigations is the group of semiconductors that lack inversion symmetry (most interesting are the ones with non-symmorphic space groups which involve glide planes and/or screw axes). In my group, hydrostatic pressure is applied to these semiconductors to close their bulk energy gap. The metallic state is predicted to harbor pairs of Weyl nodes. This approach may provide a Royal Road to many systems with Weyl nodes.

Proximity effect and supercurrents My students are also developing the know-how to proximitize topological materials and ferromagnetic materials by evaporating s-wave superconducting electrodes on cleaved crystals or films. In addition to inducing Cooper pairing in Weyl metals, we are interested in injecting triplet supercurrents into ferromagnetic films. The properties of the supercurrent are measured by the Fraunhofer effect as well as by the current-phase relation (CPR) between the critical supercurrent and the phase difference of the electrodes.

Other areas that I have worked on include topological insulators, cuprate superconductors, graphene, the anomalous Hall effect in ferromagnets, materials with large thermopower, unusual magnetism, charge density wave materials, and topics in biophysics.