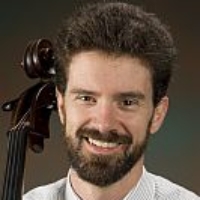 Nathan Cook has been praised for his authoritative yet relaxed playing, his sweet and pliant sound, and the combination of vigor and beauty in his interpretation (Houston Chronicle). Dr. Cook has taught and performed throughout North and South America at festivals from the Chenango Summer MusicFe...

Nathan Cook has been praised for his authoritative yet relaxed playing, his sweet and pliant sound, and the combination of vigor and beauty in his interpretation (Houston Chronicle). Dr. Cook has taught and performed throughout North and South America at festivals from the Chenango Summer MusicFest in Hamilton, New York to the Festival Internacional de Musica in Chile. Cook has been a guest clinician, coaching chamber ensembles and individuals at the Universidade do Vale do Rio dos Sinos, Brazil, and at Lawrence University in Wisconsin. Cook has also performed with chamber groups in recent tours of Mexico, Brazil, Chile, and the Eastern United States. Cook has also served as the string department chair at the summer American Festival for the Arts in Houston.

Dr. Cook is a founding member of both the Hot Earth Ensemble and the Exorior Duo with flutist Michelle Cheramy. He has served as the principal cellist of the Houston Chamber Orchestra and has been a soloist with that orchestra, the Colgate University Orchestra, and the Round Top Festival Orchestra. His solo and chamber performances have been heard on WBFO radio in Buffalo, KUHF radio in Houston, and CBC radio in St. John�s, Newfoundland. Beyond his collaborations with his Memorial University colleagues, Dr. Cook has performed with artists such as pianists Vivian Weilerstein, and Jill Timmons; violinists Sergiu Luca, Donald Weilerstein, Stephen Clapp, Ken Goldsmith and Laura Klugherz; violists Misha Galaganov, Matthew Dane, and Sheila Browne; flutist Robert Stallman; and cellists Susan Salm, Norman Fischer, and Terry King.

Dr. Cook thoroughly enjoys working with both student and professional composers throughout the composition process, blurring the lines between the creative artist and the recreative artist, and he has premiered numerous works for chamber ensembles of various instrumental combinations.

Dr. Cook hails from Appleton, Wisconsin and holds an undergraduate degree in chemistry from Grinnell College in Iowa as well as a Master of Arts in Teaching degree from Colgate University in New York. Dr. Cook received his masters and doctoral degrees in music at the Shepherd School of Music at Rice University in Houston, Texas where he studied with Norman Fischer. Dr. Cook�s other teachers have included Terry King, Evan Jones, Richard Eckert, Andre Emelianoff and Einar Holm.