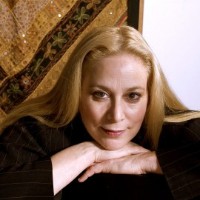 Born in Montreal, Canada, Rena Sharon began her life in chamber music at the age of eight. Her early studies were with Professor Dorothy Morton, and she continued her training at the Eastman School and Indiana University. Principal teachers were Menahem Pressler and Gyorgy Sebok, Janos Starker, a...

Born in Montreal, Canada, Rena Sharon began her life in chamber music at the age of eight. Her early studies were with Professor Dorothy Morton, and she continued her training at the Eastman School and Indiana University. Principal teachers were Menahem Pressler and Gyorgy Sebok, Janos Starker, and Joseph Gingold. Called "one of the finest musicians of her generation", and a "national treasure", she began concertizing throughout the United States, Canada, and Europe at the age of 19. In 1987 she was awarded "Best Pianist" diploma at the International Voice Competition of Rio de Janeiro. The Vancouver Sun described her as "By turns dreamer, adventurer, warrior, and wanderer… few pianists can match the deep compassion of her playing…Sharon captures it all". Among Canada's foremost chamber musicians, she has collaborated in recital with many distinguished artists including Ben Heppner, Steven Isserlis, Gary Hoffman, Scott St. John, Pamela Frank, Steven Dann, Kevin MacMillan, Richard Margison, Marina Piccinini, James Somerville, Lara St. John, Martin Beaver, James Ehnes, Susan Platts, Benjamin Butterfield, Wendy Neilsen, Brett Polegato. Recent performances include the Vocal Arts Society at the Kennedy Centre in Washington, DC, the Dalai Lama International Summit for Peace in Vancouver, Jazz at Lincoln Centre, Rockefeller University in New York City, and Ladies Morning Musical in Montreal. She was a mentor for the 2010 Banff Fall Artists Residency.

In addition to her concert schedule, Ms. Sharon also lectures extensively about Art Song topics and Chamber Music. "I Love Lieder", her popular lecture/recital, is an introduction to the collaborative interaction of poetic and musical language in the Art Song genre. She has collaborated with Dr. Michelle Le Baron, Prof. of Dispute Resolution at UBC Law and has presented at the Whistler Summit on Collaborative Governance, the CRANE seminar for mediators, and the International Association of Collaborative Legal Professionals. Her interest in cross-disciplinary dialogue and Music/Science research interaction led her to produce an Exploratory Workshop entitled “Art Song Anima – ambiguities, authenticities, auguries” at the Peter Wall Institute for Advanced Studies at UBC in 2007. The meeting was a convergence of musicians, poets, musicologists, philosophers, composers, music neuroscientists, cognitive scientists, physicians, and music therapists. She has also presented at the McMaster Institute for Music and the Mind, and the 2011 International Performance Science Conference in Toronto. She is a Co-Investigator in the current SSHRC MCRI: "Advancing Interdisciplinary Research in Singing" for which Dr. Annabel Cohen ( UPEI Dept. of Psychology) is the Principal Investigator, and a collaborator on a SSHRC SRG held by Dr. Eric Vatikiotis-Bateson which includes studies in gesture cognition in Art Song performance.