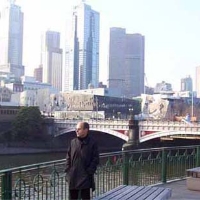 Richard Cavell is the author of McLuhan in Space: A Cultural Geography (2002; 2003; UTP “Classic” 2005; digital publication 2007), the first book to articulate the spatial turn in media studies and McLuhan’s foundational role within it. Professor Cavell is also editor of Love, Hate and Fear in Ca...

Richard Cavell is the author of McLuhan in Space: A Cultural Geography (2002; 2003; UTP “Classic” 2005; digital publication 2007), the first book to articulate the spatial turn in media studies and McLuhan’s foundational role within it. Professor Cavell is also editor of Love, Hate and Fear in Canada’s Cold War (2004; digital 2007), co-editor (with Peter Dickinson) of Sexing the Maple: A Canadian Sourcebook (2006), co-editor (with Imre Szeman) of the special double issue of the Review of Education, Pedagogy and Cultural Studies (2007) on “Cultural Studies in Canada,” creator of the website spectersofmcluhan.net, and has published more than 70 chapters, articles and reviews. His work has been translated into French, Italian, German, Romanian and Japanese.

Professor Cavell has been a faculty member of the universities of Padua and Bologna, and has given invited lectures in such venues as the University of Bologna on the occasion of its 900th anniversary; the Royal Geographical Society; the Sorbonne; the McLuhan Salon of the Canadian Embassy, Berlin; the Japanese Society for Canadian Studies, Tokyo; and the Hungarian Academy of the Sciences in Budapest. Professor Cavell’s research has been funded by the Canada Council, the Canada Research Fellowships, the Social Sciences and Humanities Research Council, the Killam Trusts, the UBC Hampton Fund, and the Research Development Initiative program of SSHRC. Professor Cavell is joint Founding Editor of the award-winning Cultural Spaces series at the University of Toronto Press; founder of the International Canadian Studies Center at UBC; one of the founders of the Canadian Association for Cultural Studies; a member of the committee that founded the Critical Studies in Sexuality Program at the University of British Columbia; Past President of the Canadian Comparative Literature Association; and a member of the Editorial Board of the Canadian Review of Comparative Literature / Revue Canadienne de la Littérature Comparée.

Among the Doctoral students Prof. Cavell has supervised, Lindsey McMaster has published her dissertation, Vancouver’s Working Girls (UBC Press, 2007), Sean Saunders has won the Stanwood Prize for best dissertation of the year (2008), Jamie Hilder was awarded one of the two Fulbright Fellowships (Arts) in Canada (2008-9) and Matthew Hiebert has received a fellowship for study at the University of Kostanz (2009-10). Prof. Cavell was Academic Convenor of the 2008 Congress of the Humanities and Social Sciences Federation of Canada, the major academic event of UBC’s centennial year; the largest conference in the history of UBC and the Federation, with over 9,000 delegates in attendance, the conference was convened on budget and set benchmarks for sustainability. The central strand unifying Professor Cavell’s research interests is spatial production, which he studies in a broad cultural context. He is currently working on three major projects: “Country Seats: Architecture, Literature, and Sexual Self-Fashioning in the English Country House, 1544-1945” (SSHRC funded 2009-12) examines sexual self-fashioning in country house architecture and literature; “Media Transatlantic” examines media philosophy in North America and German speaking Europe (with N. Friesen [CRC Thompson Rivers]; and “Histories of Forgetting” researches cultural memory in Canada.