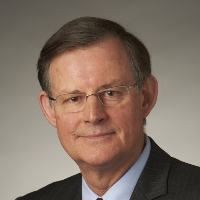 Dr. Carson is a graduate of Mount Allison (B.Comm.) and Dalhousie (B.Ed., MA) Universities, and received his PhD from the University of London in 1980. He publishes and is a frequent speaker on strategy, corporate governance, corporate social responsibility and business ethics.

Dr. Carson's career has combined business and government service with academe. While on leave from Wilfrid Laurier, he was Chief Executive Officer of the Ontario Government's Privatization Secretariat. Reporting to the Minister for Privatization, his group was responsible for the sale of Hwy 407, a fully electronic toll road, north of Toronto, Ontario. This was the largest privatization in Canadian history.

In business, Carson was Vice-President and Head of Corporate Finance for CIBC in Toronto, responsible for project and structured finance and financial advisory. Before that he was an executive at Chemical Bank of Canada (J.P. Morgan Chase).

Dr. Carson is on the board of directors of The Economical Insurance Group and the Kingston General Hospital, As well, he is a Trustee of the International Finance Participation Trust (Cordiant Capital Inc.). Carson is a former director of Comerica Bank - Canada, Waterloo North Hydro Inc., Canadian Bond Rating Service, Mitra Imaging Inc., Ontario Chamber of Commerce, Canadian Council for Public Private Partnerships and the Metropolitan Halifax Chamber of Commerce. He is a past Chair of the Board of the Greater Kitchener Waterloo Chamber of Commerce and past Vice-Chair of the Halifax International Airport Authority.

In addition, Carson has been a member of the Business Review Advisory Panel for the Minister for Privatization (Government of Ontario), Canada's Technology Triangle Economic Development Task Force, Waterloo Region Prosperity Council, Canadian Securities Institute, Investor Learning Centre, Halifax G7 Summit Executive Committee, and the World Trade Centre Institute (Halifax). In the community, Dr. Carson was active in The Kitchener and Waterloo Community Foundation and Junior Achievement. He was previously a member of the Campaign Cabinet of the United Way of Kitchener-Waterloo and Area. In Kingston, he has been a member of Imagine Kingston.