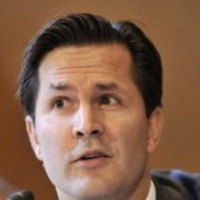 Thomas J. Bollyky is senior fellow for global health, economics, and development at the Council on Foreign Relations (CFR). He is also an adjunct professor of law at Georgetown University and consultant to the Bill and Melinda Gates Foundation.

Thomas J. Bollyky is senior fellow for global health, economics, and development at the Council on Foreign Relations (CFR). He is also an adjunct professor of law at Georgetown University and consultant to the Bill and Melinda Gates Foundation.

Prior to coming to CFR, Mr. Bollyky was a fellow at the Center for Global Development and director of intellectual property and pharmaceutical policy at the Office of the U.S. Trade Representative (USTR), where he led the negotiations for pharmaceuticals, biotechnology, and medical technologies in the U.S.-Republic of Korea Free Trade Agreement and represented USTR in the negotiations with China on the safety of food and drug imports. He was also a Fulbright scholar to South Africa, where he worked as a staff attorney at the AIDS Law Project on treatment access issues related to HIV/AIDS, and an attorney at Debevoise & Plimpton LLP, where he represented Mexico before the International Court of Justice in Avena and other Mexican Nationals (Mexico v. United States of America)and José Ernesto Medellín before the U.S. Supreme Court in Medellin v. Dretke. Mr. Bollyky is a former law clerk to Chief Judge Edward R. Korman, an international affairs fellow at CFR, and a health policy analyst through the Outstanding Scholar Program at the U.S. Department of Health and Human Services.

Mr. Bollyky has testified before the U.S. Senate on international regulatory issues in global health, and his most recent work has appeared in The New York Times, Science, Foreign Affairs, Journal of the American Medical Association, the Atlantic, and the Stanford Journal for Law, Science & Policy. Mr. Bollyky has been asked to serve in a variety of capacities at the National Academy of Sciences' Institute of Medicine (IOM), including as co-chair of the IOM workshop on international regulatory harmonization amid globalization and as a member of the IOM committee for strengthening food and drug regulation in developing countries. He is a member of the advisory committee for the Clinton Global Initiative and has served as a temporary legal adviser to the World Health Organization. In 2013, the World Economic Forum honored Mr. Bollyky as a Young Global Leader.

Mr. Bollyky received his BA in biology and history at Columbia University and his JD at Stanford Law School, where he was the president of the Stanford Law & Policy Review. He is a member of the New York and U.S. Supreme Court bars and the American Society of International Law.